blackhumour - peace in our time 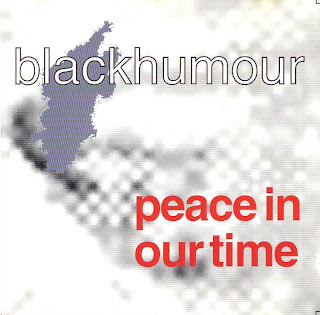 
"The blackhumour audio project had its beginnings in early 1982 with the first few experiments I was doing on my teac 4-track reel-to-reel recorder. The resulting early pieces were not so good, but some of the pieces which were done with my then audio-partner, somebody else, were successful. Two of these pieces, 'murder', and 'trade and commerce', are included in the retrospective of early bh work, 'radical positive' (banned productions). This release also shows the evolution of the blackhumour approach away from treatment/effects techniques of any kind, such as equalization, reverberation. Flanging, echo, etc., and the choice made by blackhumour to use as its sole sound-construction source the use of 'found-object' human voice only, with the exclusion of such tape techniques as speed-masking (speeding up or slowing down the sound of the voice) or back-masking (the notorious technique of playing the voices backwards). Since 'snakes in an atheist's grave' (1984), NO blackhumour piece has used anything other than found object (spoken) human voice and editing techniques. (since 1986, digital editing has been included, thanks to inexpensive digital sampling.) I wanted the sound source to be absolutely basic. The human voice speaking was about as basic as i could get. The rationale being that we are constantly hearing speech, whether it is from others, or simply the sound of our own voices in our ears."

That CD was previously released as a cassette in 1988.