Various Artists - All You Look For Isn't Here 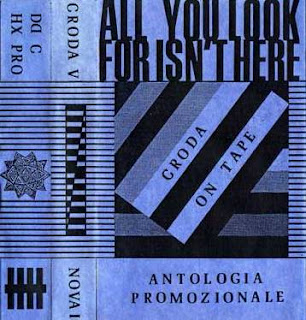 This k7 seems to have a strange feeling.
Thank you for this rare jewel.
Mary

Side one opens with "Overture" by MAGNIFICO TEMPIO, opening with Gregorian Chants, it becomes a huge and admirable Folky guitar piece, brief but obviously clever, ending once again with the Monk's chant & a meandering sequencer which cleverly heralds "Isolation" by DORIAN GRAY, a heavy, full-sounding piece of music with hints of perhaps NEW ORDER at their earlier & more interesting. FX kiss feedback in this bright-yet-sombre pop tune. "Matador" by LO ZAHIR further proves CRODA to be a quality label, a bright, atmospheric piece of music which is impossible to pin down influence-wise (although early CURE cane to mind, albeit an early CURE given today's technology & a big budget, then thinned out in the mix). It's an amazingly complex sounding, impressive instrumental. LO ZAHIR follows this with "Capo S. Vincente", once again bringing 'that group' to mind (circa "Pornography"), although this is slower, a sort of Experimental Jazz (the saxophone suggests such background, although stylewise its closer to STARTLED INSECTS than Trad). It has a relaxed / relaxing sound which might appeal to many age groups/tastes. NOISE FACTORY offer something far more gentle and calming than their name might suggest in "The Edge". Okay, so a factory / Industrial noise scrapes along the backdrop, but it compliments the chiming, gentle guitar well, giving the whole track a THIS MORTAL COIL sound. "Adieu", the first of three from DECA is another calming instrumental with watery marimba-like percussion over which a hard-flute-voiced-synth describes patterns, meandering like some heavyweight butterfly across Daliesque fields. DECA's second offering is "Where", reminding me a little of "The Orchids" by PSYCHIC TV although this drifts off in New Age-like patterns rather than maintaining a static shape. "Inchoata 1" by OPUS VIX INCHOATUM delves into more traditional fields of Industrial Music, being a dense looping, repeating mass of (grey?) noise under which synths rise in machine-like slopes. The mass itself changes slowly, reminding me of a Frippertronic set-up with radio noise fed through in an impressive way. It's quite calming & hypnotic, while having gating upper frequencies and an ever-changing background sound. "Adventus" by DIE SONNE SATAN opens with thick synthesizer sounds, then becomes a carillon of chimes over which arcade-machine-gun sounds blast, watery noise rises & falls, and all is held together by a tense, almost threatening hum. The carillon changes to real bells, ringing out a mass for unknown dead while celebrating the living. "Frammenti Da Un Sogno", the first of two from ALIO DIE comes next, another moody piece with a ringing bell, chimes, nasty raw electronic sound saved only from doomy blackness by a brighter synth and spiky chimes which grow & fade now and again. The first side closes with "Terminus" by JOHN A.I.D.S., reminding me a little of one of my own pieces, although this soon kicks up its heels and races along, becoming a dense & well-structured piece of music.

Side two opens with another piece from DORIAN GRAY - "Midnight", which opens on a dense rising note before forming into an abstract piece with some disturbing effects which drifts in soft Industrial waves, gentle-yet-unnerving. The third and final piece from DORIAN GRAY is also the longest track on the tape, clocking up a huge 10'30". Out of the three tracks this is perhaps the least impressive, being a 'live' version of "I Love You". It's problem is in the noisy environment it was recorded in (deliberate machine sounds). Despite this it shows they have a good, interesting sound & a keen interest in experimenting. "Radionoise 4 Alpha" by NOISE FACTORY is closer to that which the name suggests, being mainly manipulated short wave radio. It is interesting, but still not my taste in listening fodder. They then offer "Fango Viscido" which is a far more composed thing, a calm rhythmic piece with a simplistic-but-interesting drum rhythm, chamber-watery sounds, mood synth & whispered voice. It is by far their most advanced piece on this tape. A live version of "Aria" by FRONTE ORIENTALE follows, and has a similar mood, dark and brooding, reminding me of SLEEP CHAMBER in their earlier, more primal, more vital mode, although they sing in Italian (I think). ALIO DIE offer the disturbing "Metempsicosi", which would sound in place as incidental music on a nerve-shattering horror film soundtrack, Full of darkness, great crashes of white splinter lightning, electrical overload, doom humming, synthetic other-worldly noise. It would not be out of place on the COLD MEAT INDUSTRY label, and might even show then a thing or two about Dark Music. DECA offer "Flood Nightmare" as their last track, another dark and atmospheric piece of Industrial music. A huge vocabulary of sounds makes this not only chilling, but a thoroughly interesting piece of music. JOHN A.I.D.S. closes the album with the second longest track "Rex Tenebrarum", a decidedly Industrial piece clocking up an impressive 9'43". Full of dense rising noise, clouds of black distorted sound, voice slowed to a thick sludge, synths harmonious, adding contrast to the otherwise lung-blocking ground mist of noise. It has a dark and Satanic feel to it, a threat of evil in the words spoken, whispered, shouted. It's a corking example of the genre, comprising both non-beat & beat, continually changing, always interesting, always disturbing.