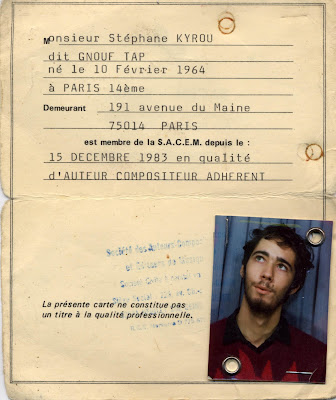 
When I wrote Axel Kyrou that I wished to post the debut Vox Populi! cassette, "Introduction À La Théorie De La Subjectivité Relative", he answered that before I do so, he would like to offer earlier VP! recordings for sharing. He also sent the visual above and wrote the following statement to introduce these recordings :


'The Teen Recordings' were recorded between 1979 and 1981. These are the first and, yet, unreleased recordings by Vox Populi! As the title suggests, I made them during my teens (I'm from 1964), with some help from my elder brother Ariel on vocals, jaw's harp and percussion. I play synth, radio waves, video games, tapes, bass, guitar, jaw's harp and voices. I must say that we had a very encouraging family environment. Our father Ado was a great fan of any kind of unusual and extreme forms of music. I remember very well my father's PA being blown out by one of the first Whitehouse recordings ! He was a TV/film director and a writer. My mother Mireille is a musician and she had worked under Pierre Schaeffer's direction for a few years at the institution that became soon after the IRCAM. For sure, they were on our side and they did help in many ways. A big Thank is due to them.
I hope you'll enjoy these goofy DIY recordings made with very little means.
Wishing to you music lovers all the best,
Axel, for Vox Populi!

PS : apart from Nostalgie de la boue, you'll find many other VP! releases on 3 other musical blogs :
http://thethingonthedoorstep.blogspot.com/
http://misteriosoimpossivel.blogspot.com/
http://atlantisaudioarchive.blogspot.com/
It is our deliberate policy to make most of our music freely available. Vox Populi! returns to Populi, so...

Excellent ! thank you for listing the links available and thanks to kyriou to let it shared, not like the moronesque hafler trio/McKenzie

Thanks to you both for the generosity of this post.

Sad that even though the band gave their blessing for these things to be shared that the copyright trolls have them taken down. Should be some penalty for abusing ability to take down stuff. Thanks so much for the reup. It's a joy to be able to discover so much musical history.