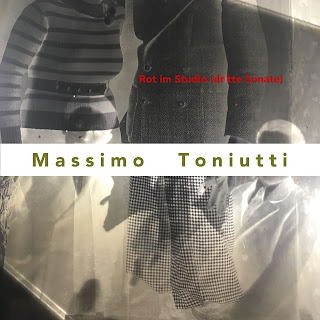 Audiofile
Label : Nostalgie De La Boue [ndlb#153], Ivory Coast, 2021
"Studio in Rosso Composition Series" is a project born out of my need for a variable structure to be played live. Titled "Just a Trigger in uno Studio in Rosso", it made its debut at a venue in Austria in September 2018, followed in May of the next year by "Uno studio in Russolo" where I changed it a bit by introducing different recordings. It was played at the Cafe Oto in London to celebrate Oren Ambarchi's fiftieth birthday.
The musical performance presented here, "Rot im Studio (dritte Sonate)", is a third approach to this material. Played live in my studio (Autumn 2020) with the help of some additional edit and post production, it's mainly based on the first study (originally thought of as a quadraphony).
There are two main types of sound sources working here : the continuous (modulation) and the discrete (constellations), the former being made up mainly of sustained excited strings, the latter being a collection of sounds from my archive specially gathered and edited during the drafting of the 2018 reissue of "Il Museo Selvatico".
I like to draw connecting lines between stories and materials so I want to say, as an anecdote, that some of the excited strings (probably what I considered the trigger itself) come from a recording I improvised some years ago in order to supply Tristan Koreya with a new track for his net label. Its path eventually became tortuous but at long last, happily tarnished by a number of overlaps, it managed to reach this target as well.
- Massimo Toniutti
Tracklist :
1. Rot im Studio (dritte Sonate) (17:50)
LISTEN / DOWNLOAD